Objectives
(i) To generate employment opportunities in rural as well as urban areas of the country through setting up of new self-employment ventures/projects/micro enterprises.
(ii) To bring together widely dispersed traditional artisans/ rural and urban unemployed youth and give them self-employment opportunities to the extent possible, at their place.
(iii) To provide continuous and sustainable employment to a large segment of traditional and prospective artisans and rural and urban unemployed youth in the country, so as to help arrest migration of rural youth to urban areas.
(iv) To increase the wage earning capacity of artisans and contribute to increase in the growth rate of rural and urban employment.

Benefits
• The maximum cost of the project/unit admissible under manufacturing sector is Rs.25 lakh and under business/service sector is Rs.10 lakh.
• Per capita investment should not exceed ₹ 1.00 lakh in plain areas and ₹ 1.50 lakhs in Hilly areas.
• Own contribution 5% to 10% of project cost.
• General category beneficiaries can avail of margin money subsidy of 25 % of the project cost in rural areas and 15% in urban areas. For beneficiaries belonging to special categories such as scheduled caste/scheduled tribe /women the margin money subsidy is 35% in rural areas and 25% in urban areas.
• Quantum of Margin Money Subsidy is given as follows:

Know about this scheme :-

Objectives
The Scheme aims at facilitating technology up-gradation by providing 15 per cent upfront capital subsidy up to a maximum cap of ₹ 15.00 lakhs (i.e., maximum investment in approved machinery is ₹ 1.00 crore) to MSE units including tiny, khadi, village and coir industrial units on institutional finance availed by them for induction of state-of-the-art or near state-of-the-art technology for up-gradation of the present technology level to a substantially higher one involving improved productivity, and/or improvement in quality of product and/or improved environmental condition including work environment. It would also include installation of improved packaging technique as well as anti-pollution measures, energy conservation machinery, in-house testing and on-line quality control.

Salient Features The Credit Linked Capital Subsidy Scheme (CLCSS) was launched on 1st October, 2000. The Cabinet Committee on Economic Affairs (CCEA) has approved the changes in ceiling of credit from ₹ 40.00 lakhs to ₹ 1.00 crore with the rate of subsidy enhanced from 12% to 15% w.e.f. 29th September, 2005.

Scope
Presently, the Scheme facilitates subsidy to 51 sub-sectors/products including Khadi and Village Industries. As the Scheme progressed, the list of products/sub-sectors has been expanded by inducting new technologies/products/sub-sectors with the approval of the competent authority i.e., Technical Sub-Committee (TSC) and Governing and Technology Approval Board (GTAB) of the CLCSS.

Implementation
At present, the Scheme is being implemented by 12 nodal banks/agencies including SIDBI and NABARD. Except SIDBI and NABARD, all the nodal banks/agencies would consider proposals only in respect of credit approved by their respective branches, whereas, for other Primary Lending Institutions (PLI) approved under the guidelines, SIDBI and NABARD would be the nodal agencies for release of subsidy under this Scheme. Online Application and Tracking System has been introduced w.e.f. 01.10.2013 and the SME units need to upload their subsidy claim application though their PLIs.

Procedural Aspects
This Scheme is linked with term loans availed by the MSEs from Banks or Financial Institutions. To claim subsidy under CLCSS, eligible MSEs are required to apply online through Primary Lending Institutions (PLIs), from where the MSEs availed term loan for up-gradation of technology. The completed application is being uploaded by PLI through Online Application and Tracking System to the attached Nodal Agency, which, in turn, recommends the application online to Office of DC (MSME) for release of subsidy. After processing of application and subject to availability of funds, due approval is accorded from competent authority and concurrence of Internal Finance Wing, after which funds are released to Nodal Agencies. Funds are then transferred by the Nodal Agencies to the PLIs where the account of the MSE is operated.

Performance
Performance of Credit Linked Capital Subsidy Scheme (CLCSS) from the inception (2001-02) upto 2015-16 is given below: 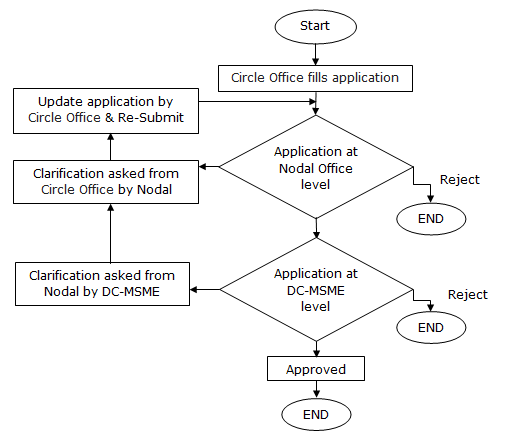